Procurement: What David Cameron, Francis Maude and I want to make happen

Last Friday, I attended a meeting at the Treasury about SME procurement. It was fascinating, memorable and useful, not least because I got to see David Cameron, our Prime Minister, in person for the first time.

This was the (first?) “SME Strategic Supplier Summit” and it was hosted by Francis Maude who is Minister for the Cabinet Office. The aim of the afternoon debate (which included about 100 representatives of small and medium sized suppliers to the government bodies, as well as press and senior members of the civil service) was to:
Seated in cabaret style, the meeting began with the PM and Francis Maude entering to open up the debate and make some initial speeches. Baroness Eaton, the LGA Chairman also gave a presentation. A number of key initiatives were announced (see here, here, here, here and here for Government and press reports of them). Also attached is the document we were given to help seed the debate. 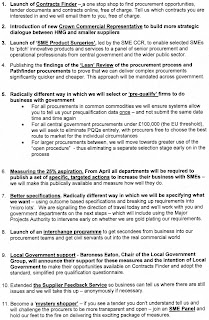 The essential message from all the presentations is that the Government is thoroughly committed to making Government procurement more ‘SME friendly’. Their ambition is that around 25% of all government contracts will be with SME suppliers (although one person later questioned whether this was as a % of contracts or a % of value).

People who read my blog will know, I have some strong opinions about procurement! (My humorous rant against the excesses of procurement, my suggestion for what makes an excellent procurement function and the need for more commercial leadership can all be accessed from those hot links.) And so, it was a real pleasure to hear about the Government’s plans to make procurement less onerous and more effective. Moreover, it was great to hear that I am not alone in my views! I was also very impressed that the Minister stayed for the whole afternoon, engaging in the table debates that occurred.

Some selected comments from Francis Maude:
And very interestingly
I am watching this space with interest and I have already subscribed to the new and free one stop shop for Government procurement (Contracts Finder). I would recommend all suppliers and buyers do likewise. I am happy to report that SMEs were involved in the development of this new service (we were told this at the event in answer to my question).

So what now? Naturally, I am a little sceptical, although I do not doubt the verve and commitment of David Cameron and Francis Maude. I am sceptical because I have seen much of this before with the Glover report which seems to have only had marginal impact. (As a small example, I am still sometimes asked to provide paper copies of tenders when this report specifically recommended doing away with this.)

I am also cautious in my optimism because I think there are a number of very big dilemmas the Government has to handle in driving forward on this strategy. They will need to find a way to balance:
I could go on (and already this blog post is probably far too long: so thanks for reading to here!) but I will end on one thought. And this picks up on a constant theme of my blog – the need to take a whole system perspective. One point I made at the event, which Francis Maude said was a good one, was the need to involve the end user in the procurement process. I used the example of a soldier sitting for the first time in a newly procured and sparkly tank: the soldier knows immediately that it will not work as well as it should and could have done.
What we need is (to coin a phrase) “whole chain procurement” that brings people together to co-design and thence procure the services we all need to create a civil society: one that is creative, ambitious and fair!