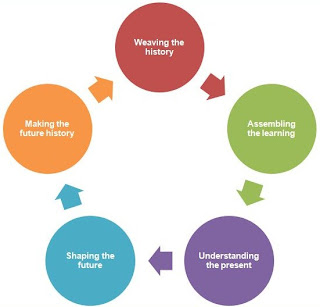 A linear process with a beginning middle and end does not match the reality of most executive team building.

I developed this model in response to a tender - and so I thought it would helpful to post it here.

It centres on asking a series of questions at each stage:

What a fabulous sculpture!

I like the idea of a sculpture to encourage people to dream. It certainly is

a triumph, a stunning visual feast, and a spectacular object lesson in the "art of the possible", demonstrating what can be achieved when committed people with a shared vision work together towards a common goal.

In my view - the core purpose of the public services is to assist people to dream, have ambitions and realise these - either through providing the tools to enable this (such as education) or remove the barriers to their achievement (tackling ill health and crime). I hope this beautiful sculpture inspires people both as citizens and as service providers - to make more dreams possible.

Do you identify with either of these camps?

Do you know others who do?

What can you do, as a leader, to build a bridge between these groups?

Cornwall and then Tunisia beckons - so this blog will be quiet for the next couple of weeks. Thanks to everyone who has visited over the last few months - so far there have been over 1300 page impressions.

Whether you are a regular visitor here (and there is a growing number) or you have wandered in by accident or just come here for the first time - you are most welcome. Please browse. I hope you find the blog posts of interest.

Do please email me jon@jonharveyassociates.co.uk with any feedback if you would like.

Very best wishes to all.

The nail machine - a story of pain & learning

Many years ago I was doing some work with a nail factory in Cardiff. The company, along with its sister steel companies, have, sadly, long since gone to the wall. I met and got to know some great people. This assignment was one of my first as a consultant - working then on Total Quality Management.
In the course of my work I talked about improvement and learning with a wide range of people in the firm. One man I worked with was the shop steward who had a wisdom and gentleness that I remember to this day.
He once told me story about the six inch nail machine. There was only one and it was a big machine, not surprisingly. Indeed the operator had a small raised platform on which to stand and keep the machine going. The task involved ensuring that the feed of steel rods into one end of machine was kept going smoothly while nails emerged from the other end. (My engineering knowledge is limited!) At various points during this process a button had to pressed near the hopper where the nails emerged and were collected. This button could not be reached from the raised platform. So several times each shift (perhaps even 50 to 60 times), the operator had to walk down the steps from his platform, walk around the machine and press the button. He then returned to his platform. It was a tedious part of the job. The man who operated the machine was a friend of the shop steward and had worked on that machine for over 20 years. He knew it well.
There was an occasion for the shop steward to work the night shift - something he very rarely did. On this occasion he happened to walk past the six inch nail machine and observed the night operator making it work. Everything was the same except at the point when the button needed to be pressed. Instead of walking down the steps and around the machine, the night operator picked a slighly odd shaped pole and used it to hit the button and the machine carried on operating. The shop steward looked on intrigued.
When he was next on the day shift, he went over to see his friend operating the six inch nail machine. He saw him working as normal. There came a moment when the button needed to be pressed and he said "stop" to his friend. The shop steward climbed the steps and asked his friend what the pole was for. His friend said something like:
"I don't know - it came with the machine when they delivered it way back" and shrugged his shoulders.
The shop steward showed him what the pole could be used for, having seen this on the night shift.
At this point, the shop steward observed (so he told me later) a dawning and excruciating realisation pass across the face of his friend as he mentally counted the times he had walked up and down the steps over the last 20 years or so. The learning was painful...
There are many lessons in here for me including communication, assured systems of work, induction & training etc etc. But what I want to focus upon is the idea that learning can yield huge amounts of pain.
If we learn something new - that upsets what we thought was reliable & true - there can be pain to be experienced. I am left wondering if we sometimes know this (perhaps subconsciously) and so we avoid learning - despite all the evidence and arguments to the contrary. We resolutely hold onto the past, because even though we know that there is a better way, it would mean experiencing such excruciating pain, that we would rather live in ignorance.
What do you think?
Letting go of old ideas & practises can be very, very difficult.
Posted by Jon Harvey at Thursday, August 06, 2009 2 comments:

Some trees look perfectly formed from a distance and close up. Many others though are random networks of twigs and branches. But the messy ones seem to survive as well as the symmetrical ones.

I wonder whether leaders can put too much effort into designing elegant and ‘symmetrical’ organisational structures, believing that strength will come from this order. Perhaps we should allow the innate strength of the twigs, the branches and indeed the ‘idea’ of the tree be what holds everything together?

If your organisational structure was a tree – what kind of tree would it be?

How flexible is the structure?

Some key questions to consider for those managing the change
INQUIRY: Are you from Vienna? This particular blog posting has been looked at every couple of days over the last few months by someone from Vienna. May I ask why? I am intrigued. Please email me... Thanks.
Posted by Jon Harvey at Tuesday, August 04, 2009 No comments:

I am often struck that when a road layout changes, I struggle almost immediately to remember what it was like before.

Organisational change can be bit like that. But often we need to tell the story about how far the organisation has come in order to energise people for the next stage. So a wise leader makes sure that progress is evident and that stories of change are repeated.

Make sure that progress is evident and the stories are recounted along the way. Photographs can be really helpful to show how things were and how things are now. Photographs record the small changes that we might otherwise miss.

What will you photograph today?