How do you cut back?

Times are tough for everyone. Whether you are a business, a public organisation or some kind of charitable or community body, you will be having to cut back on your spending. Here are three ways in which it can be done: 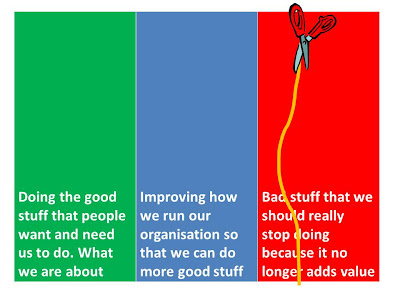 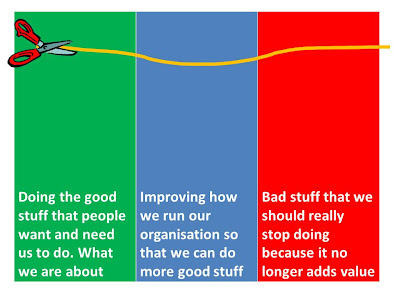 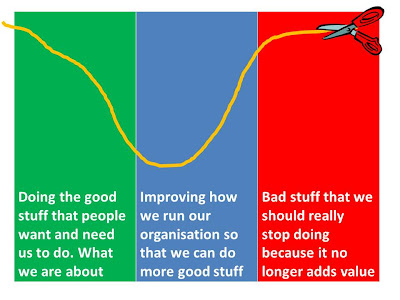 Which do you think is the best way?
Posted by Jon Harvey at Friday, September 28, 2012 No comments:

On Thursday 4 October from 12pm to 2pm, the Guardian are hosting a live web discussion whether the elected PCCs can improve police morale at a time of privatisation, cuts and perceived political bias. (Do join in! I will be taking part.)

This got me thinking about what attributes a PCC will need to have to inspire the police (and others within their influence) towards improved morale and even greater results. So, last night, on the train off to see the Beach Boys at the Royal Albert Hall, I mapped out this list:

First and foremost, the PCC will need to show total respect for the work that police officers and staff do and the people that they are. Any hint that the PCC regards him or herself as being above other people is to be avoided... (yes, you know what I am referencing).

In my experience as a leadership development adviser, lesson 101 for leaders is have a crystal clear vision. People may not always agree with that vision but they at least know what direction is being taken. Uncertainty about direction is big downer. (I have written before about what makes for a good vision.)

Given the political nature of the job, I think it will be vital for the elected PCCs to engage in 'worthy politics' which might be best defined as not petty, point-scoring party politics. Nobody (least of all people in the police service, I suspect) is inspired by politicians who only seem to want do down the opposition or leap in front of the press camera at any given moment.

If there is one thing that I know that really frustrates police officers and staff is not having the equipment to do their jobs effectively, efficiently and safely. PCCs will boost morale if they arrive with a clear commitment to ensure adequate kit. Any PCC who thinks they can save money by not doing so does not really understand policing.

People in all organisations like to see their leaders being held to account. Whatever the PCC can do make their challenges (and support) to their Chief Constable open, transparent and accessible will boost morale.

That said, an inspirational PCC will always challenge constructively and remember that giving feedback often says more about the person giving it than it does the person on the receiving end. Having the wit to ask good questions, especially ones that have come from either side of the front line (ie from victims too) will be essential.

A PCC will boost morale by just doing one simple thing: listening. Sadly, in my view, too many politicians (of all hues) spend too much of their time in broadcast mode and seem unable / unwilling to answer straight questions... or even just hear what people have got to say. Listening is good and will help. Being available and accessible is good and will help.

Police culture has a lot to do with ACTION! (Sometimes with not enough circumspection and reflection, I would add!) And so to boost morale, the PCC will need to be seen as a person of action. I am not advocating some sort of manic inititiativitis (the police service already has enough of that) but I am saying that if a PCC gets to be known for always being at HQ, this will not go down well. Remember, police officers notice where cars go and where they park...

An inspirational PCC will understand that it is their job to earn respect not demand it... and certainly not create symbols (such as chains of office) to impose respect upon people.

Be funny and occasionally self deprecating. A PCC who cannot make people laugh or who is so pompous as they are unable to laugh at themselves will not do wonders for staff morale. Humour slices through reserve and opposition in a way that often rational debate cannot.

I think we have seen great examples of emotionally intelligent leadership from CC Peter Fahy and ACC Garry Shewan (of Greater Manchester Police) in the last couple of weeks after the murder of two young police officers. They were both rock solid but able to show emotion and understand how much emotion there was around. A good PCC will be able to do the same and will understand that the work of the police service (and the wider justice agencies) is often filled with highly charged emotion. Unfeeling steel automatons need not apply: PCCs must not be 'robocops'.

And finally, in my view, PCCs will need to practice ethical and authentic leadership that is marbled with integrity and clear values. If a PCC is perceived as saying one thing but doing (or deciding) another, this will damage morale. If a PCC uses principles like a drunk uses a lamppost (for occasional support rather than illumination for the journey), this will not work. One of things that police officers and staff are very good at, is spotting charlatans.

But what do you think? You are welcome to comment below and/or join the Guardian debate next Thursday.
Posted by Jon Harvey at Friday, September 28, 2012 No comments:

I will nail my colours to the mast: I believe it is outrageous when politicians direct a body under their control to begin or maintain a course of action when evidence shows that action to be (at worst) harmful or (at best) ineffective. Good politicians achieve a balance of ideology, popularity, science and pragmatism. Bad politicians allow this balance to get skewed too far in one or two directions.

Yesterday saw the publication of a report from Policy Exchange (a ‘Right leaning thinktank’ as it is often described) about electronic tagging. You can read it here. To quote the website intro “The report notes that in other countries, in particular the US, ankle bracelets have become smaller, smarter and more durable. The most advanced forms of tags are now GPS-enabled allowing the police to pin point someone’s exact location at all times. However, the lack of competition and the current nature of the contracts in the UK market means the taxpayer is losing out.”

In the introduction to the report itself, Chris Miller (a former senior police officer) says “What we have been given instead is a sclerotic, centrally controlled, top down system that has enriched two or three large suppliers, that lacks the innovation and flexibility of international comparators and that fails to demonstrate either that it is value for money or that it does anything to reduce offending.”

Not only does this report effectively damn the current commercial suppliers of electronic tagging but also proposes (remember this is a ‘Right leaning thinktank’) insourcing the process.

Meanwhile in Scotland last week it was announced that G4S (famed supplier to London 2012 and one of the suppliers of tagging in E&W referenced by Policy Exchange) have just won a contract to supply tagging to the criminal justice system north of the border. Admittedly, the tagging being provided is of the GPS kind referenced in the PE report.

But… nevertheless… on what planet did it make sense to award this contract? I would love to know whether the procurement process in Scotland included contact with Policy Exchange. Did they share data? How did due diligence ensure that the contract signed with G4S would not also lead to the kind of sclerotic lack of innovation that Chris Miller highlights?

Let me repeat, I am not (really I am not) against the outsourcing of all services. I am not some kind of Orwellian despot who believes that the public services should provide everything from Victory Gin to a telescreen in every home. But as I hope that my article in the Guardian from a few months ago made clear, outsourcing is a veritable minefield of hidden costs (both financial and human) that have often been overlooked. This needs to change. Now!

I really hope that the politicians vying to become Police and Crime Commissioners pay heed to the evidence & science when deciding on the shape of their policing plans. Policing already has far too many nostrums in its practice. Good PCCs will be in the vanguard of introducing more evidence based practice (including commissioning)!

PS But beware commercially sponsored research into finding out what works as Ben Goldacre (as always) highlighted at the weekend. A great, must read article for anyone concerned about evidence based practice in the public services.

Posted by Jon Harvey at Tuesday, September 25, 2012 No comments: